I recently created this cool cigar-smoking thug character & logo for the cigar aficionado store and message board website Gar Trader. The above artwork and design is actually an alternate version I created for the client, the final was required to be much, much smaller to fit into his website, but he also wanted to be able to offer t-shirts and other merchandise so I created this version (which is my personal fave).

END_OF_DOCUMENT_TOKEN_TO_BE_REPLACED

“Average Joe” is a recent cartoon character mascot I created for a client. The project specs were pretty straightforward – two cartoon characters, one being “Average Joe” who would become the company mascot, and for this particular illustration he would need a sexy cartoon woman wrapped around him.

This project had a very tight deadline, so I got to work immediately on the sketches. The initial rough sketch was created to get the general idea down and to start the conversation. Being a tight deadline, I sent out a sketch that normally I would have refined a bit before sending. In this case, I needed immediate feedback on the direction so I sent this rough concept to get the client’s OK on the overall posing of the characters and the general look.

END_OF_DOCUMENT_TOKEN_TO_BE_REPLACED 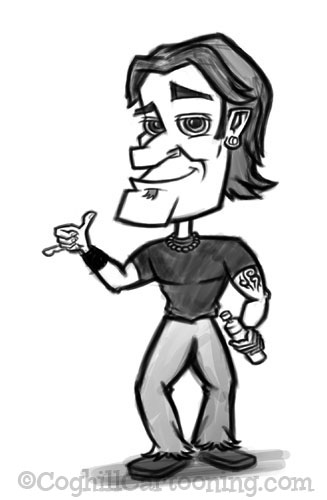 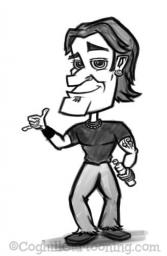 This cartoon sketch of a trendy ‘cool guy’ rocker type mascot character was created for a current project. He was to the the male ‘companion’ character for the cute cartoon indie rock/alternative rock girl created for the same project. While I love how the head and face came out, I am not so pleased with the body – could use a bit more flair. This is an initial working sketch, so had the client approved that would have been edited. The client wanted to go in a different direction with him, so he’s on the reserve list for perhaps another project.