The Wacom Intuos4 is a killer graphics tablet and highly recommended if you work with graphics software.

For this review I am referring to the Wacom Intuos4 Medium Pen Tablet, however there are also the Large and Small models available. Each have similar tech specs, and I will discuss why I chose the Medium version in the review.

The other notable changes are in the hardware, most notably the “scroll ring” which replaces the Intuos3’s Touch Strips, and in the new illuminated Express Keys in the Medium and Large models.

The USB cable is also detachable now, which has the added benefit of allowing you to orient the tablet for left-handed or right handed users.

The Intuos4 pen/stylus is also of a newer design, it’s shorter than the stylus that shipped with the Intuos3 and I think it feels nicer in the hand. 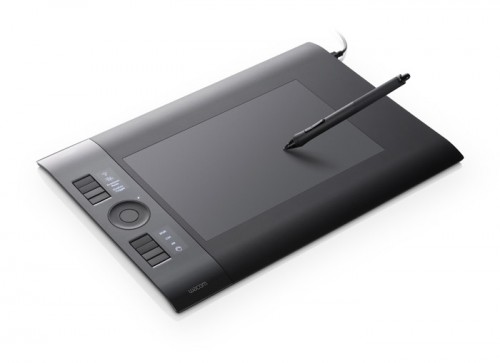 The first thing you’ll notice coming from the Intuos3 is that the drawing surface of the Intuos4 has a bit more “grip” or tooth to it. Far less slick and slippery than the Intuos3, Wacom claims it’s more paper-like but my impression was that it had a rubbery feel to it.

That said, the areas where I primarily draw with the stylus are worn down and now more like the Intuous3’s slicker surface, but not as much as the Intuos3. The drawing surface is also no longer replaceable, but in my usage over the last year it has proven to be much more durable that the Intuos3 surface which I had to replace twice.

Drawing and sketching with the Intuos4 with it’s 2,048 pressure sensitivity levels is awesome. You have much more control over the quality of the line you create. And as with the Intuos3, the 5,080 lines per inch of resolution allow you for a very smooth and accurate tracking of the mouse pointer.

I’m not one to use the Express Keys or the Scroll Ring much, but they do what Wacom says they will do. I don’t find the Scroll Ring to be as fluid as I would like as far as the on-screen scrolling.

As usual, the drivers for the Intuos series offer much more customization over the lower-priced consumer line Bamboo graphics tablets

, including a per-application button customization which I find to be indispensable.

The primary graphics software I use my Wacom Intuos4 tablet with is Adobe Photoshop and Adobe Illustrator. I’m very happy to report that it works great with both of those applications. Drawing in Adobe Photoshop in conjunction with the Wacom Intuos4 is a dream since the release of Creative Suite 4 (and Creative Suite 5) due to the new Rotate View tool and the Drag-Resize Brush keyboard shortcut. It’s as close to working on paper as I can imagine it can get.

As far as durability of the Intuos4, aside from the wearing off of the toothy surface, the tablet has held up great and as with all the Wacom tablets I have owned, I have had zero problems with it.

I am using the Intuos4 on a Mac Pro running Mac OS X 10.6.4 and have had no major issues with it that I can recall. I keep my Wacom drivers updated regularly. 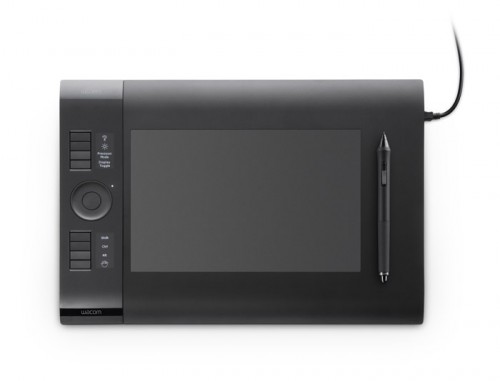 The Intuos4 tablets are noticeably thinner than the Intuos3 models, which is a welcome change. The Intuos4 sits nice and unobtrusively on my desk in front of my keyboard (yes, that’s where I place mine).

One last note on my choice of the Medium model: I use dual monitors on my Mac setup, and having the extra drawing surface area helps to keep my hand movements more natural and give me a bit of “play” in the tracking of the stylus. A larger tablet would require me to have to move my arm too far to span the dual-monitor desktop, and a smaller tablet would make the mouse pointer move too fast. If you have a single monitor setup, I would suggest the Small model.

In summary, I love my Wacom Intuos4 and the upgrade from the Intuos3 was well worth it. If you are an Intuos3 user looking to upgrade, I think you’ll be very happy with the purchase. If you are a user of the Bamboo or one of Wacom’s other consumer-level models, the price jump is well worth the quality and features you get with the Intuos4. And if you are new to the entire graphics tablet world, you can’t go wrong with an Intuos from Wacom. It’s an investment that will last for many many years.

While the newer Bamboo graphics tablets are quite nice (I own one myself for occasional use with my MacBook), nothing beats the Intuos4.