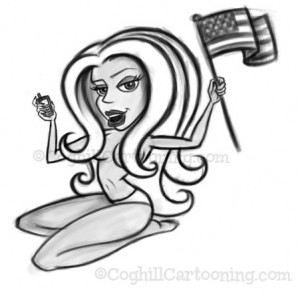 A rough sketch of a cartoon pinup girl with American flag & mobile phone. This was drawn for a project I am currently working on for a client, updating their existing mascot character artÂ to be used with the company logo and other branding. It was rejected due to not being the kind of pose the client wanted for the woman.

She has potential, but there are a few things proportion-wise that I think need to be reworked, particularly with her face — the lips are a bit low on the head, and the eyes are a bit off. These are all things that would have been tweaked in the revision stage.

At this point I wanted to get the general idea over to the client for feedback before I went too far, and in this case it was the smart thing to do since I will need to start from scratch with her.

The client wants go go with a more upright pose, similar to the existing mascot character art which I am updating. The confusion over direction is due to a lack of communication, which usuallyÂ doesn’t happen for me with clients, but at times it happens to all of us.

This is a good example of why it’s important to not only have a good creative brief at the outset to gather information about the project from the client, but also to keep in constant contact with your client, so any wrong turns can be rectified ASAP, before you spend too much time on a concept only to have the client reject it.

The cell phone and American flag are branding items to go with the client’s company name. These also were very loosely roughed in as IÂ wasn’t exactly sure how I wanted to handle them, or if we wanted to include them at all. Particularly the cell phone, as small items such as this can get lost once the mascot character art is reproduced at smaller sizes, such as on business cards and website headers and banners. Especially true when used in conjunction with the logo.

Original sketch was done with pencil on paper, scanned into Photoshop CS3, and cleaned up using the Wacom Intuos3 graphics tablet.

Back to the drawing board (and Photoshop and the Wacom tablet)!