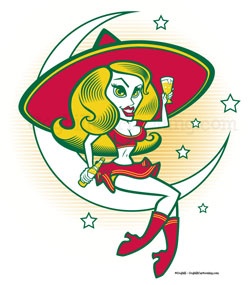 I recently updated the “Girl in the Moon” artwork (while drinking some Miller High Life beers, of course). I had initially created a version of her a few years back, and while I thought it was good at the time, lately I have been wanting to update her as she was my first attempt at a pinup style illustration. I have been working towards a certain look/style for the pinup girls, including some devil girl pinup art and others and felt I was getting closer to that vision as of late.

I thought it only fair to go back and update the original. A request to get that original art in t-shirt format prompted me to start work on the new version.

Probably not the best time to start a new project, as I have quite a bit of work on my plate at the moment, but I had some time between sketch & layout approvals last weekend so instead of enjoying the “time off”, I decided to get to work instead. Personal projects have a tendency to get pushed back again and again, so any time I have I try to get at least something started for personal art projects.

The final vector illustration here is not based off of the final sketch I worked up (and also went to almost-final vector with). 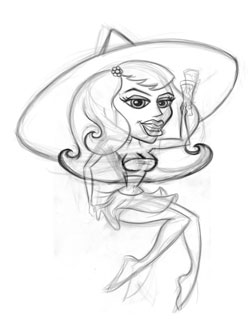 As you can see from this original sketch, she has quite a different look to her. She’s a little more “girl-next-door-ish”, and I wanted to give her more of a sultry look. She has a witch hat, so I thought she should be a bit more wicked.

I got pretty far into the vectoring before I decided that I wasn’t happy with the direction of the artwork. I think I was just so happy that the new sketch looked better than the old that I wasn’t as critical as I should have been at the sketch stage.

I made some attempts to tweak the vector art and nudge the existing art into something else, but soon realized I needed to start from scratch. Since I had built her in parts, I was able to salvage the arms, most of the hair and the legs (which went through extensive fine-tuning during the final tweak stage). The torso was salvaged to some degree, but it took a fair amount of reworking to get the breasts juuuust right. It’s a pinup — these things have got to be perfect. The same went for the legs. I slaved over those almost as much as I did the rest of the artwork to get all the vector curves exactly right.

The final element was the graphic treatment of the lines in her hair. I had done something similar in the original, but it wasn’t what it should have been. Both times the lines were created using blends in Illustrator – blends aren’t just for color, you can do shape transitions as well. I looked in some of my Illustrator techniques books and online to learn more about controlling blends more precisely. Turns out if you drag handles out from the ends of the blend spine, you can control the “speed” of the blend. In other words, you control the spacing patterns at the ends of the spine. The initial blend has a uniform spacing, but tweaking the control handles allows you to scrunch them at the ends and slowly space them out towards the middle.

I am extremely pleased with how the final cartoon vector illustration came out, and glad to have another project on my list finished up. I have a few more on the list and those have also been getting some attention, even if it is a year overdue on some of them. While this wasn’t an original project, getting the Girl in the Moon in line with the rest of the pinup art I have been working on was just something I really felt I needed to accomplish, and in my mind it’s a brand new illustration on it’s own.

Check out the Girl in the Moon pinup on my portfolio.

One thought on “The Girl In The Moon”