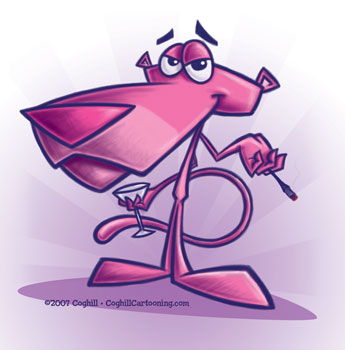 As I mentioned on the post at SFG, the Pink Panther was always one of my favorite cartoons as a kid. There was just something unique about the art direction and style that just made an impression on me back then.

I also liked the fact that the Pink Panther didn’t speak. There’s something that just cool about having the guts to do that with your main character.

I sketched this out roughly on paper, and then scanned and re-drew in Photoshop. Color, shading and highlights were added on separate layers, and I also experimented with the non-black outlines — something I am always meaning to work with but never actually get down to doing it on any artwork. I thought this was a great time to try it out.