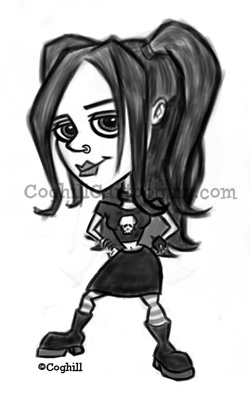 A good example of this is the Surfer Dude cartoon character sketch I worked up initially for the client to kind of get the ball rolling and for the client to make sure I could deliver a style that worked for his vision of the project.

Eventually the Surfer Dude will be replaced with a more “Trendy Cool Guy” character, and the body will need to be updated to allow for uniformity in the overall character group design. I love how the Surfer Dude came out overall, but the proportioning that works for him doesn’t usually work with female characters, or with a businessman or Dad character. I’ll need to tone down the eventual “Trendy Guy” from the initial Surfer Dude style.

Once I had a basic template for an adult male, and adult female and a child I used those as reduced transparency layers in Photoshop as templates to work on scanned rough sketches for newer character in order to keep facial and body proportions consistent.

The entire series is initially roughed out on paper, scanned into Photoshop and then sketched, edited, resized and tweaked to complete the final finished rough sketch.

Normally I will work on the head and body as separate layers in order to allow resizing later on to get proportions correct.