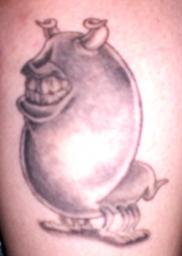 Months ago a fan emailed me to get the OK to use one of my sketches as a tattoo. I usually give the go-ahead on any not-for-profit use of my personal art (that said, unless I actually do give the OK, it’s not officially OK). In this case since it was a personal sketch I had done I was cool with it.

I have a few tattoos myself (all done by the venerable Eric Starr over at Arkham Tattoo in Akron, Ohio). I can sympathize with someone who finds the right art for a tattoo – I had Eric ink over a bunch of early stuff that I became less than enthralled with – and now have a huge Japanes-style koi fish shoulder piece in addition to my original Mayan God/Ancient Astronaut glyph.

People’s choices of art for tattoos are always interesting to me. Like many, I am not one to jump in and get something on a whim, and endlessly agonize over the ‘right’ image for something so permanent. Seeing so many terrible tattoo choices over the years, and some of the stories I have heard from E. Starr in the past always kept me on guard.

The original art for the cartoon teeth creature/monster (at left) is one of my faves, and I was curious to see how it would translate into a tattoo. I think the result came out pretty good. I was kind of surprised to get the email as I had forgotten about the whole thing (it was almost a year ago when the request was granted). It’s always cool when people follow up on their word. I like to see how people are using the art.

I thought I’d post this one up for the archives.