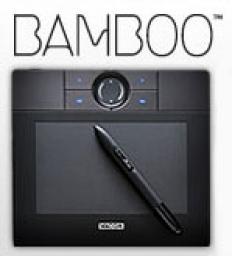 I recently had the opportunity to try out a Wacom Bamboo graphics tablet, having purchased one for my Dad this holiday season. Dad is not a graphics guy by any means, but I use my Wacom tablets for so much more than just drawing and graphics applications – and love it so much – that I thought the Bamboo was a perfect accessory for another ardent computer geek.

In short, the Bamboo is a great entry-level tablet for casual users, but graphic artists will want to seriously consider investing in one of the pricier, but more fully-featured Intuos3 models. Read on for full details.

Out of the box, this thing impresses. Looks very slick, and is amazingly and significantly thinner than the Intuos3 series graphics tablets. Also, the non-active area around the tablet is much reduced, although it may be an optical illusion based on the differing placement of the buttons and scroll area.

The scroll area is round, as opposed to the vertical Touch Strip on the Intuos. I don’t like the Intuos3’s TouchStrip, and found the round touch-sensitive scroll area on the Bamboo to be much more ergonomic. The Bamboo has a unique pen as well, about the same thickness as the Intuos3 stylus, but shorter. It has a decent weight and balance to it, but here I prefer the Intuos3 stylus.

Driver installation was a breeze – the software doesn’t even require a reboot on OS X. Otherwise you just plug it in to a free USB port and you’re all set. One nice feature on the Bamboo that I wish my Intuos had: a detachable USB cable. Nice touch, and I have no idea why the smallest model in the Intuos3 series doesn’t follow suit. Not a deal-breaker for the Intuos3, but cool nonetheless.

I let Dad play around for a while, a bit (understandably) bewildered. Using a graphics tablet takes some acclimatization; I usually recommend using for at least an hour a day for about a month or so. Your mind & meat need to get used to the mechanics of the new device. I swear by ‘Pen Mode’ , where the area of the tablet is matched exactly to the area of the monitor. There’s also ‘Mouse Mode’, where the tablet acts just like a mouse – you can lift away from the tablet surface and drop the stylus back down in another area on the tablet, and the pointer stays where you left it on-screen. Dad seemed to prefer Mouse Mode, but I think that preference will soon wear off. It probably helps with the transition, however.

When I finally had my chance to play with the Bamboo a bit, the first glaring difference I noticed was in the material used for the tablet surface itself – much less silky than the Intuos3 surface. Not bad by any means, but after using the pro series, it’s very noticeable. It reminds me very much of the surface on the old Wacom tablet I use at a contract client’s office who still uses G3 computers (and OS9!) – those older tablets need Apple’s old ADB/serial port that is now (thankfully) discontinued on Macs in favor of USB. I’m not sure of the exact model, but it was not a pro series for sure. Probably an equivalent to the niche the Bamboo now fills.

Another major difference was the driver software. I was quite surprised to see that the Bamboo driver software does not support application-specific settings as does the Intuos3 series. You can set sensitivity settings and customize the stylus buttons, but these are applied system-wide.

Not a major issue, but for customization geeks like myself, this is a limiting feature. Per-application settings for stylus button functions and pressure sensitivity is handy for those instances when you want it. For the target Bamboo customer though, probably fine. The driver software also required you to set everything with sliders, as opposed to the small “scratch pad” area on the Intuos3 driver which would interpret your actual stylus usage and set the sliders automagically.

I thought to myself that Wacom should incorporate the advanced Intuos3 features in the preferences – but gray them out so users would know what other features are available with the high-end models.

Otherwise, the Bamboo was quite impressive, especially considering the price point. I went with the bare-bones version because I knew the Bamboo Fun’s mouse would never be used, and the Bamboo Fun also didn’t look a sleek as the standard version – the rounded edges make it look too toy-like. With a lower pressure sensitivity than the Intuos3 series, you have to allow for the inherent differences. But for basic, casual drawing and photo retouching — as well as general input device usage — the Bamboo delivers.

If you are a graphics professional, or prefer more customization with your tools, I highly suggest spending the extra cash to get an Intuos3 series graphics tablet instead; it’s well worth the price jump. However for the basic, occasional use — or for an introduction into the world of graphics tablets — you can’t go wrong with the Wacom Bamboo.