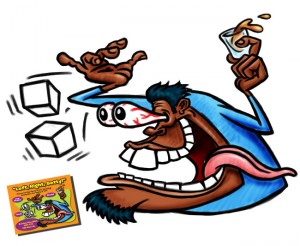 This cartoon character drawing was created for a friend’s upcoming party, which will also be doubling as a U.S. wedding reception for our friend Setty, who just got married over in India.

The friend who requested the art suggested creating it in the Odd Rods/”Big Daddy” Roth style which I am known to emulate from time to time.

The artwork was sketched on paper, then scanned into Photoshop and then cleaned up and colored using my Wacom graphics tablet. Color was added flat to a separate layer set to Multiply, and then the shading and highlights were added using the dodge/burn tool.

I have a few small tweaks to do to the artwork, but not much more as this is a freebie project so it will most likely stay as a color drawing. The bottom left thumbnail is a small preview of the full layout for the poster, created in Adobe Illustrator. The L, R & C on the dice were added in Illustrator as it’s much easier for me to tweak and skew the lettering to make it match the perspective of the dice faces.

Here’s a larger version of the working layout for the poster: 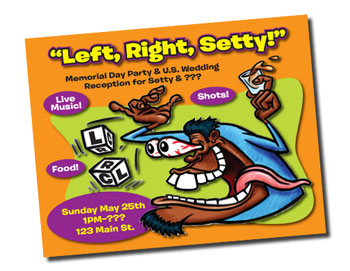