Sometimes (and probably most of the time) merely seeing how an effect is achieved will offer no clues as to what it’s like to create that effect for yourself. Copying or mimicking the effect can help, but those moments where it works within your own artwork should be explored the moment they happen.

When these chance moments appear, when you have that ‘a ha!’ moment, be sure to dig deeper. I’ll share with you a recent ‘eureka’ moment I had while working on a t-shirt illustration project for a client.

I am currently working on an illustration for a t-shirt design. The main figure is a tough guy admiral cartoon character, and due to the theme of the illustration he has a bushy red Scottish beard.

When working with the elements in Adobe Illustrator, I was copying & pasting elements into a new file in order to mirror up two halves to get more symmetry. By doing so, I accidentally left out some of the vector elements – in particular the black outlines – but the resulting artwork had a very cool look to it, which I decided to explore.

Below is a clipping from the in-progress full artwork, with the relevant head & beard area where I had the ‘eureka’ moment: 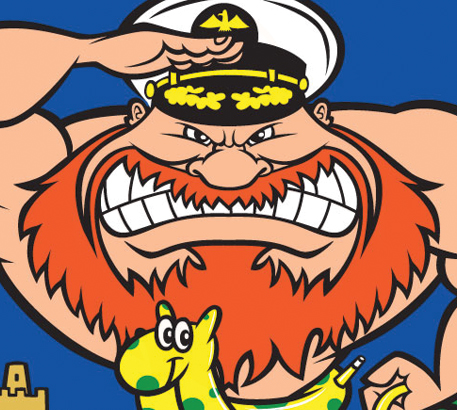 Accidentally I did not select the black line art areas, and below is the resulting pasted artwork (and subsequently tweaked): 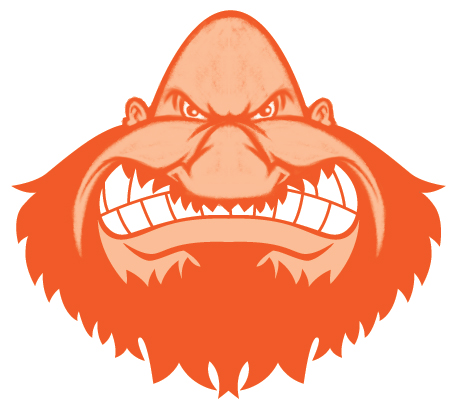 I found the line work much more compelling in the second version (or at least uniqely compelling in it’s own way), and a style that I do not usually utilize or explore. It is also a style I have been wanting to practice up on more for sitations such as a one- or two-color piece of artwork. I added the eyes, nose, upper face and ears as I was exploring the style.

Always keep looking, and be on the lookout for inspiration in every situation – even in your worn artwork. When I pasted the orange beard with just the flesh of the lower jaw – boom. I saw how the line art was working very harmoniously, with a perfect balance of the positive and negative shape areas, each defining the other with a minimum of visual  information.

I dropped what I was doing to get into the feel or flow of that style so I could get the direct experience of creating it. I wanted to start the muscle memory and have my eyes, body & mind go through the process together to get a sense of what it’s like to create this kind of artwork. I wanted ot do this while I was ‘seeing it’, while I was in ‘the zone’.

Although this ‘eureka’ style will not work with the current project I am working on, it will no doubt be invaluable as I now have a process to go from creating the work I already have a feel for, and am now able to convert to, and explore this high-contrast style when needed or appropriate. The general feel of my artwork will stay the same, but with a new type of look that I can add to my arsenal.

Have you had a eureka moment yourself, or have any tips for getting into the ‘eureka moments’? Please share in the comments section below.