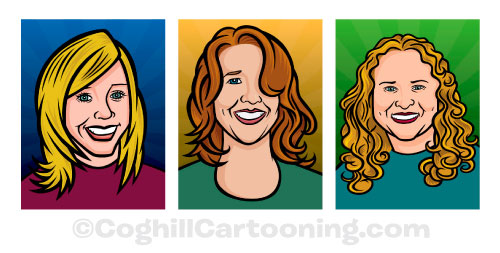 The client supplied a few photos of each person, and while one was chosen as the “master pose”, it’s always helpful to have a few photos of people to get an overall concept of what they look like. Sometimes a single photo of a person may not “look like them” to someone who doesn’t know them personally.

The artwork was drawn directly from the photos with obvious artistic tweaks from referencing the other photos to get the proper shape of the face and the proportion of features. These were taken pretty far as the color art sketches are concerned, as I wanted to get the look of the shading down before I went to the vector art stage. It was discussed early on to go for a trendy look and the flat shading is perfect for that style. The sample below is of a final color sketch with the photo of the subject for comparison. 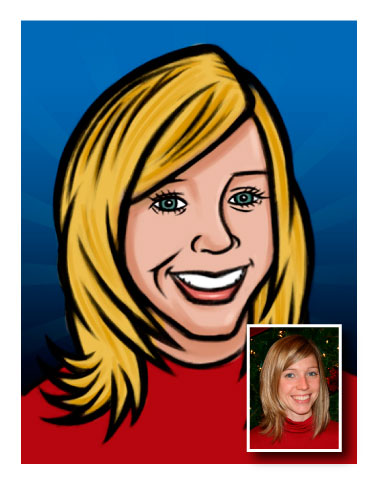 Once the color studies were approved by the client, it was for the most part straightforward to get the final art in vector format. All the vector art was hand-created and there were some creative touches added at the vector art stage, in particular the hair highlights and shading. It’s much easier to work out the tapered line effect in Illustrator than it is to hand draw it in Photoshop.

The colors were chosen based on the branding palette, and I went with background colors from the company palette and chose shirt colors than complimented the background colors as well as the hair color. I had originally attemepted to use the company palette in the shirts as well, but as they were all close to primary colors it ended up look too comic-book-ish. I wanted these to have more of an illustrative style so I went with more muted secondary colors using the Illustrator Recolor Artwork color tools in the Color Guide palette to find appropriate starting points. The finals were tweaked manually.

Another consideration for the colors was to choose a color palette for each that not only was harmonious within the particular illustration, but also worked well with the others when seen together. By doing so, these should also work well with any future branding materials created for Positively Cleveland. At least as long as they stick to the branding colors.

The final art was exported and saved as print-ready EPS files as well as exported as small, medium and large JPEG images. While typically I would export a flat-shaded vector image as a GIF to keep file size down, in this case there was a subtle gradient in the background and I didn’t want to introduce the banding that can result in a GIF file with gradients. 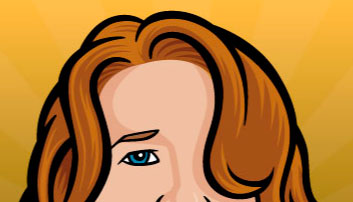 The final art came out great and I was exceptionally pleased with the look of the hair in the middle avatar — her hairstyle just lent itself to the tapered lines and curves so perfectly. It was a natural fit.