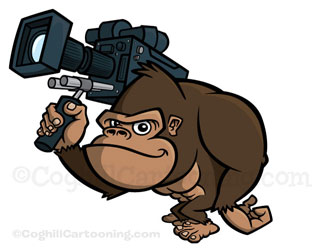 I recently created this cartoon gorilla holding a video camera as a logo/mascot character for a client. I went through several rounds of sketches on this illustration, some sent to the client, some not. For some reason, I was really struggling with getting the ape to look like an ape. Initial sketches had him looking too “monster-ish”, which of course is not desired. It was odd because monkeys, gorillas and apes are probably some of the most fun types of characters to draw, and I just assumed it would come naturally.

But the biggest pain in the ass on this project was getting the camera down. After finding enough reference images to piece together a general video camera, drawing all the angles properly and getting the lens in line with all the angles was a major undertaking. I think sometimes my mental imagery of 3D objects works better at some times than others. And I am not one of those people who have vivid mental imagery whatsoever; in fact, my mind’s eye is quite hazy and vague. More visual impressions than actual imagery. But that’s a topic for a whole other blog post.

Eventually I got the angles correct, and got the gorilla looking like a gorilla. I still feel he could be more exaggerated, but the client was pleased with this direction so the vector art was created. Hand vectored in Adobe Illustrator.

A full logo was part of this mascot cartooning project, but at present I am still waiting to hear back from the client after repeated attempts to contact him after sending the most recent round of lettering concepts. Another good reason to get deposits. I just hope the client hasn’t decided to go ahead and take out my watermark and use the image.