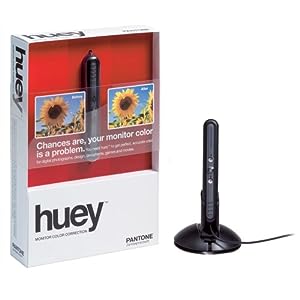 I recently purchased one of these Pantone Huey monitor calibration gizmos to enhance my on-screen ability to proof colors for accuracy when printing. In short, it’s awesome and worth every penny. Read on for more…

The basic premise of this tool is simple: it sticks to your screen (during calibration) and samples colors using a sensor to determine how your monitor is displaying color, and how it should look. It then saves a monitor profile, which is a small preferences file your computer uses when it displays images/colors. The result? On-screen colors that more or less accurately display how the final out put will appear when printed.

When I first set it up and ran through the initial calibration, I held up the most recent issue of the monthly full-color, glossy magazine I was designing at the time next to the actual PDFs which were sent to the printer. In the words of Darth Vader, “Impressive, most impressive.”. While not 100% accurate, it was far and away closer than my setup had been previously, so much so that I now can rely on on-screen viewing of my design & illustration work and feel confident that I know how it will print. Very, very cool.

The Pantone Huey has some preset “user environments” to help in simulating on-screen appearances. Obviously I used the ‘Graphic Design’ settting, but there were others to choose from such as ‘Gaming’, ‘Web Browsing’ & ‘Photo Editing’, as well as some other choices that seeemed to defeat the purpose of this device: ‘Warm, medium contrast’; ‘Cool, low contrast’ & variations. These seemed arbitrary and not tied to a standard, so how does this make anything more accurate when you are just tweaking the colors to your taste, visually? To me that’s no difference than going through and tweaking the settings without the Huey. Maybe I am missing the point.

The odd thing about this device is the resulting settings — man was my brand new ViewSonic VP2030b 20.1″ LCD Monitor looking yellow! The weird thing is now that I have used it for some time, it looks exactly right. In fact, my other monitor [dual monitors are a must have for me once I tried it years ago] looks way too blue, and I even went in and tried to visually match it to the main monitor using the built-in monitor calibration in Mac OS X. No luck.

The Huey, I was told by a helpful Pantone rep via email, is a consumer level device and does not support multiple-monitor setups like mine. He suggested one of their (of course) more expensive models. I really feel that after my experience with the Huey I will be upgrading in the future. My secondary monitor is primarily used for Adobe Illustrator/InDesign/Photoshop palettes, to keep my main screen image-only, and the occasional reference document when I am working on something, so color accuracy is not an issue for the other screen.

One other neat feature: it optionally sits on your desk and monitors the ambient light in the room, and adjusts itself accordingly. Of course, in my dimly lit cave the light rarely changes, but there are some cool Knight Rider KITT-esque lights that flash when it does it thing, and what self-respecting computer geek/gadget freak doesn’t want another USB device cluttering their creative workspace?

I highly recommend this device to anyone working with graphics on a computer monitor, especially those who work in the print medium. At around $70, it’s worth every last cent having that color-correct security blanket wrapped around your artwork.

Get it cheap from Amazon.