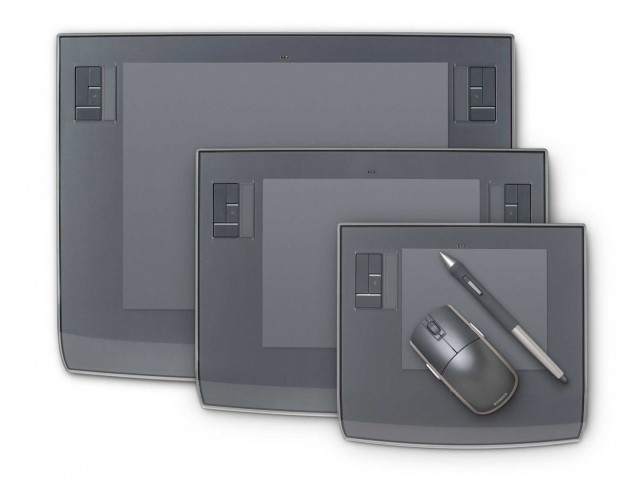 In short, these things are phenomenally awesome, and worth every single last cent you pay for them. I liked the Wacom Intuos3 6×11 Graphics Tablet I bought for the desktop so much, and use it so much that I bought the smaller Wacom Intuos3 4×6 Graphics Tablet for my laptop. It fits perfectly in my STM Alley laptop shoulder bag along with my MacBook (I also recommend the Tom Bihn Absolute Comfort Should Strap as an upgrade to any laptop shoulder bag).

If you aren’t familiar with a graphics tablet, it’s pretty simple: it’s an input device accessory you attach to your computer that has a “live” drawing area, as well as a wireless pen & (crappy) mouse that you move over the live area, and it controls the mouse pointer on your screen. You usually hover the pen over the surface, and then tap to click, two taps to double click, and can drag & drop item just as you would with a mouse. There is no learning curve at all if you know how to use a mouse, and know how to use a pen or pencil. The Intuos line of tablets also have some other buttons that we’ll get to later. The other cool thing is that they are pressure-sensitive, which means they can act like a brush, where the harder you press, the bigger/darker the brushstroke. It’s all infinitely customizable in a Wacom-friendly graphics program such as Adobe Photoshop & Adobe Illustrator.

Now, the versions I own are the top of the line Intuos3 models (although the Ã¼ber tablet over at Wacom, the Cintiq is actually an LCD monitor that you draw directly on! It’s also über expensive. And über cool.). Wacom (pronounced “walk-em”, although I still say “way-com”) also sells some less expensive models as well. – the Graphire series. The big difference being the extra doo-dads and the higher resolution & pressure sensitivity in the Intuos line. I went with the big daddy versions because drawing on a Mac is what I do most of the day, and I wanted the best tools and was willing to pay for them. You, dear reader, may be fine with the Graphire series. The price jump to Intuos is significant, but worth it.

Why is pressure sensitivity and resolution so important? Well, it directly affects your interaction with the digital canvas. Higher levels of pressure sensitivity means the Photoshop & Illustrator brushes will respond more accurately to your pen strokes, giving you more control. The higher resolution means the pen is way smoother as you drag across the screen. A lower resolution tablet will be more “jumpy”, although I used to have a Graphire-equivalent Wacom years ago and it was great.

This next issue is one that I spent lots of time trying to wrap my head around: which size tablet to buy? I went with both widescreen models as my desktop setup (currently a PowerMac G4 dual 1.25) has dual monitors, and the square ratioed tablets would leave me with lots of wasted tablet area. Same for the MacBook, which has the widescreen monitor. But why buy the larger tablet just for the desktop? Couldn’t one just use the smaller one and be done with it? The answer is yes, and for some this might be the preferred route. Here’s what the big difference is:

The larger tablets give you more “play” in your brushstrokes/mouse movements. This can be a benefit if you draw widely and expressively (which I don’t). It could be a curse if you draw in small, measured lines (which I do). So why did I get the larger model? Well, I actually took a chance, and decided I would return it if I didn’t like it. But I did. I like that my small movements were not exaggerated. A smaller tablet will do this, since you are “mapping” the tablet’s live area to the actual screen. So, a small flick of the pen on a smaller tablet when using a large monitor will result in a huge mouse movement. When using a larger tablet, this is minimized. For some, this may not be desirable, but I like it that way. If you don’t want to move your hand & arm as much, get the smaller one. I feel as if it gives me much more control over the mouse movements.

So, now we know how to choose one, but will I like using it, particularly in Adobe Illustrator? The answer is a resounding yes! The surface of the tablet’s drawing area is silky smooth, and drawing the pen across can be a satisfying experience on it’s own. I know that sounds weird to say, but once you try it out you’ll know what I mean. It’s just so exactly how you wanted it to feel, even more than you realized was even possible. Your productivity will blast into the outer regions of the solar system, trust me. Try the Wacom pen out with the Illustrator brush tool and you will be blown away. It literally will put a huge grin on your face. The effects are equally awesome in Photoshop. If you were, like me, wondering how well a graphics tablet works in Illustrator, trust me it will blow your expectations to smithereens.

The Intuos tablets have customizable buttons on the sides of the tablet which default to the standard modifier keys on a Mac keyboard: Control, Shift, Option, and Command (or the Apple key). These keys are slightly different on a Windows setup, but work the same. The other cool Intuous-only feature are the Touch Strips, which are touch-sensitive areas that you can run your finger up and down to scroll. They can be customized to do anything from Zooming to ther keystrokes as well. They work OK, but not great, and they also require you to use two hands with the tablet & pen.

There are two issues I have with the Intuos tablets, as much as I love them. First, selecting points on Illustrator vector paths can be a frustrating hit-or-miss experience. I actually think it has more to do with the newer, higher resolution monitors out nowadays. Even Adobe has decided to help us out in the new Illustrator CS3, in which the anchor points will magnify on mouseover. The other issue is that of scrolling. It’s odd to not have a scroll wheel or ball on the tablet or pen, and would probably be weird if they did this. The Touch Strips mentioned above definitely cover this area, but now we’re up to a two-handed approach. The Touch Strips can bve set up to be activated by the pen, but you end up losing your pointer on the screen and it just gets more complicated than you want it to be.

I emailed Wacom about this, and even suggested a shareware Mac application called Smart Scroll X that has a nifty feature called Grab Scroll, where you set up a key combo that when pressed, you “grab” the area of the screen underneath and can move the pen (or a standard mouse) to scroll the window. Since the Wacom pens have two programmable buttons on the side, I set the SmartScroll Grab Scroll feature to “Mouse Button 5” and then set one of my Wacom pen buttons to activate “Mouse Button 5”. It works great and I wish Wacom shipped with something like this so users could work almost one-handed when not working in a graphics program. It gets tiresome, after using mice with scroll wheels for so many years, to have to go back to finding and dragging the scroll bar in application windows. Using another hand to use the Wacom Touch Strip is not an ideal solution in my opinion.

UPDATE: New Wacom driver software has been released, adding a basic version of this functionality! But be sure to read why I think Smart Scroll X still has potential in your workflow (I use it myself).

I have also discovered that xGestures, a cool gesture-based input program (which needs a review all on it’s own) has some sort of conflict with the Wacom tablets. It eventually messes up your menus after a while of use. I used to swear by xGestures, but the Wacom takes precedence. At the time of this writing I have never heard back from the developer after bringing this issue up to him. Who knows, it could just be something with my system and all the other little utility programs I have running.

Well, that’s it for this review. I really wanted to get more into the cartoonist, artist and illustrator side of things with the review as opposed to a breakdown of all the features. If you have been considering one but have wavered on the price, let me tell you that once you use these for an hour you will never think again about the price. You will love it that much.

So what are you waiting for – go get yourself one over at Amazon! Wacom Intuos3 6×11 Graphics Tablet